Loving the sweater, hating the hair 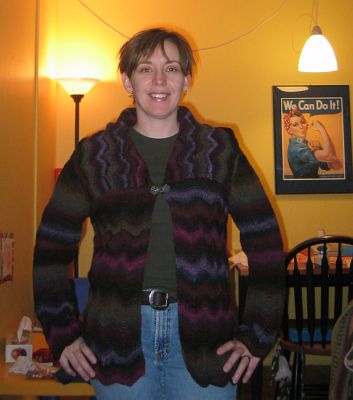 Here's the lovely Butterfly.  Nice eh?  Notice my fingers poking out the sleeves?  They're still a bit long, but I couldn't rip any more out or I would lose increases and would have to change the sleeve cap.  In the end, I ripped back to one row after the last sleeve increase and took out two rows in the sleeve cap.  Beware of these sleeves if you attempt this sweater.

Like Claudia I used a frog closure instead of the hook and eye and I'm really happy with it.  There's a close up here  if you would like to see it.  I picked something unshiny and simple (which is hard for these fasteners) because I didn't want to detract from the collar (though with the size of this thing it would be difficult).

I love the collar--here it is from the back. 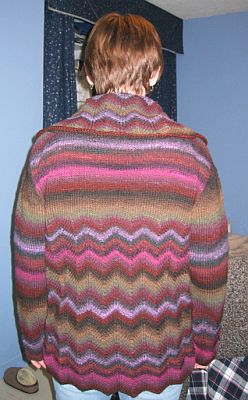 And here's an outside shot to show off the colours better.  (Here's the part where we get to my hair.  I decided not to cut my head off in this picture so I have a visual reminder of what I was whining about if I ever read my archives.) 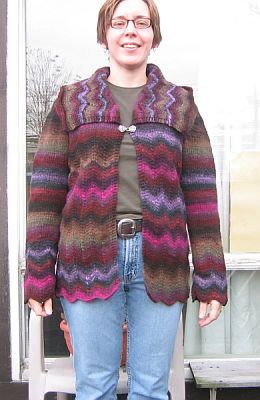 I hate my haircut.  I was actually disappointed when I left the salon, but figured I was just getting used to the short hair.  I go to the Aveda Hair School and this is the first bad cut I've received.  But now, two weeks later, after much goop and styling tricks and denial, I realize: I hate my hair.  It makes me look old.  I think my student-stylist did a poor job--there are technical issues and it doesn't suit me.  And it's a bit late to go back (they have a policy on this--I asked).  And there's probably not much that can be fixed that won't involve this turning into a really really short hair cut.

It's not the sassy short cuts I've worn most of my life (the hair you've seen me with is the longest it's been since I was about 12).  So it's not a short-hair phobia thing.  It's a "I traded in a sophisticated graduated bob for an old lady cut" thing.  I want the bob back.  It could happen in less than six months I suppose.  This is all made worse by the fact that I've been housebound with a sick kid (and now two sick kids and a sick husband) and I don't have work or more important thing to fixate on.  It feels a bit better just saying it.

And I have a fab new sweater and a opening in my WIPs!

You Butterfly is beautiful and fits very well and I like your colorway. The hais isn't so bad...a good stylist could make you happy with it until it grows out.

You wrestled it to the ground! Way to go. Love the frog choice.

1) Great sweater! I think the sleeve length turned out well.
2) The hair isn't as bad as you think, it will grow quickly, there are other stylists, and hey - it's hat season!

So sorry you don't like the haircut...I've had short haircuts that I ended up not liking, and it's just no fun. But it'll grow out...at least it's a renewable resource!

Butterfly looks so good no one will notice your hair! And your hair doesn't look bad.

You always look good. Really. and the sweater is truly fabulous.

Really a nice butterfly !!
Could you remember me : which colour of Noro ?
I really love your noro's knit.. by which will I like start? entrelac, klaralund or butterfly...
which were you pleased the most to knit?

Your Butterfly looks great, and I love the Noro shade you used! Fab work :) !

Butterfly looks really great!!! Love the colors. and I think your hair looks cute, but then it really matters how you feel.

Love the sweater. It's a keeper.
Perhaps a jaunty chapeau to top off the outfit??

I love the way Butterfly turned out..great job (thanks for all the tips too). Now I'm inspired to start my own..after the million or so last minute Christmas gifts that is! With regards to hair..my hairdresser always says to me "its just hair..it will grow!" Maybe you should try some hilights or a slight colour change to lessen the pain while you wait.

Well the great thing about hair is that it does grow and your haircut will not last forever. In the meantime you can snuggle in your beautiful Butterfly!

I love the Butterfly, it looks great. The frog clips are incredible, where did you get them?

Your Butterfly looks great (mine is languishing under the pile of Christmas knitting currently). The frog closure is a good way to go - great colours, too!

Butterfly is beautiful, and I completely sympathize with your hair woes. If you get it cut again, they may not have to go too short - maybe they can just add a little more shaping. I hated my previous haircut until I got my current haircut, and now I want the old hair back! :)

The sweater is beautiful and so are you.

you and the sweater look great!

Awww - Butterfly is SO pretty! And as for the hair, well, I totally understand how you feel - I've been there! - BUT, I don't think it makes you look old at all! I think it's cute - I actually like the top pic where it's a little more fringy in front on your forehead. OK - the *only* thing that might help, and maybe it's the photo - I can't really tell, but if someone made the back left side look a bit more fringy like the right side, maybe that'd get you through til it grew out a bit?? happy Holidays - either way, I think it's *much* nicer than a bob! :D

Beautiful job on the Butterfly!! The question for me is, how long can I resist? And I like the hair, too, but just having recently had a traumatic incident at a hair salong (worse than yours), I totally understand. :) Jenifer

Love the sweater, thanks for the hints. How about if you shave your hair off - or clip it to less than an inch? It is so hassle-free and daring. :)

It seems everyone knows this pattern well. Where can I find the pattern? I've been googling and searching... no luck!!! I'm new enough that I could certainly not figure it out from looking at it. LOVE this sweater!!! yummmmm