Black is where it's at. 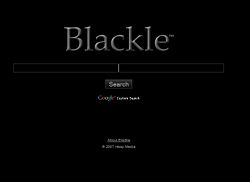 Apparently, a Black google would save a lot of energy.  At least that's what the folks at Blackle are saying.  I think it's neat so it's now my new home page.  It's a Google powered search engine, so what's not to like?  I use Google Mail, Calendar, Scholar and Maps a whole bunch so I do miss having a direct link from the Google page.

Does doing this really make a difference?  I figure it can't hurt.  I don't mind taking the ton of feathers approach as long as there are some big changes happening too.  Not that my Prime Minister is aiding that.

ADDED LATER: A quick search shows that the savings may not be all that considerable (and that white on black is hard on the eyes). This article provides some great ways to save lots of energy.  I should really do more of these.  I tend to leave my laptop on all the time (with the lid closed) which I'm sure hogs power.  Even pulling the power cord out would be better.  And I didn't even consider the DSL modem and router.  Though I confess I like having a house where I can just be on the internet wherever.

Guess I have some work to do.

Speaking of the little things--anyone know of an alternative to North American GU10 halogen bulbs?  My house is almost exclusively lit with these and my hydro bill is crazy and I know they're energy hogs.  I assume something will change once the provincial ban on incandescents goes through in 2012, but I'm willing to make the switch now.

I love blackle, a friend who works as an auditor (and so attuned to saving money - energy is cash after all too) told me about it. I'm waiting for google to pay attention to it though. I use blackle, I want it for all the other google products, - a darker gmail! Its better for you to read on off-white anyway.

If, like most people, you have an LCD monitor, Blackle doesn't save you energy, and in some cases actually uses more energy than google.

I'm waiting for the dozens of people who use Blackle to come down with eye strain because of the grey-on-black scheme, as reading black text on a white or off-white background is much better for your eyes than trying to make out grey on black.

If you want to make a user-side stylesheet, you can make any website dark without having someone else do it for you, but you really ONLY save power doing that if you're using a CRT-type monitor. Laptop monitors and other LCD's don't 'save' energy with a black color scheme, in part because the part that uses the most energy -- the backlight -- is on whether your background is light or dark.

Sorry for the rant, but I've seen too many people trying to "push" blackle, and even a quick search (not with blackle) gives the REAL energy stats, not just the 'feel-good' stats that Blackle wants you to think about.

Before my laptop fried, I nearly always had it on. It was just so convenient to open it up and hop on the web or work on a program or what not that I had no incentive to ever turn it off.

I'm pretty seriously astigmatic, and prone to eyestrain headaches, and I find white text (or grey text) on black painful and hard to read. (Not as bad as black-on-red, or blue-on-red, which I've seen some websites use. Ouch.)

I think I'll walk to meetings on campus instead of driving, or make sure to turn off all unused lights, or use compact fluorescents, to save energy instead.

(And yes - I question how much energy it actually saves running Blackle instead of Google, especially on an LCD monitor.)

Researching how to exist more gently on the planet is my current obsession (my family is getting tired of it, and my mother outright rebelled).
The Union of Concerned Scientists have come up with a short list of which consumer activities have the largest impact:
cars and light trucks
meat and poultry
fruit, vegetables and grains
home heating, hot water, and a/c
household appliances and lighting
home construction
household water and sewage

Put extremely succinctly, their message is "Drive less, and don't worry about diapers" ![my words, not a direct quote!]in The Consumer's Guide to Effective Environmental Choices.

From what I understand about lighting, LEDs are the best (not widely available) followed by compact fluorescents. The newer ones have a nicer color of light and don't flicker like the older ones did. They're also a lot cheaper than they used to be. You do have to find a place to dispose them -- they shouldn't go into the trash (but that doesn't outweigh their benefits).

Thank you so much for bringing up this topic! And it may be a cliche, but it's true: I love your blog!

"It can't hurt..." As a matter of fact, it can hurt the planet. Everyone assumes Blackle is honest in their attempts to save the planet, but no one bothered to check out their claims. We did. We pulled out a watt meter. and tested it. Guess watt? Blackle uses more power than does Google. So switch back and tell everyone you know.

On the subject of light bulbs, I'm assuming your halogen lights are overhead, no? Get yourself some thrift-store lamps and equip them with compact fluorescents. Better yet, treat yourself to an energy-efficient Ott Lite.

We unplug everything when we leave town and because we're in Colorado, we buy wind power. Got lots of that, here. Wind.

Talked to the resident expert about your halogens. No way around them if you want white light. The compacts aren't too bad once they're warmed up. I believe GE is working on the bulb shapes so they will look more like the incandescents. Should be out by 2010. The only thing about the compacts is that they contain lead. There are recycling companies but they are having collection problems.

I think energy companies came up with Blackle. Conspiracy????

Every little bit helps when trying to conserve energy and save money. Your province has some excellent money rebate programs. All the info and forms on the provincial government website.

My province has nothing. The Federal program blows.

I unplug everything I can. Turn my computer right off when I'm not using it. The ADSL is a problem so that's not touched.

Solar panel prices have risen due to the cost of silicon. My guess is too many people want 'natural feeling' phoney boobs. The storage batteries pose a problem.

In business they talk about being good 'corporate' citizens. I think all of us, every individual, have a responsibility to be good 'environmental' citizens. But how many of us would be willing to give up items like our cell phones/blackberries?

Getting off the soapbox.

I think doing whatever you can when you can is great. We would drive ourselves crazy, (and dear hubby does) if we obsessed about every little energy saving thing. But that we do SOMETHING, makes a difference. It inspires others around us to start doing their part too. Just don't give up and not do ANYTHING because the cause looks to big and impossible.
Jennie