Voila!  The stairs are complete: 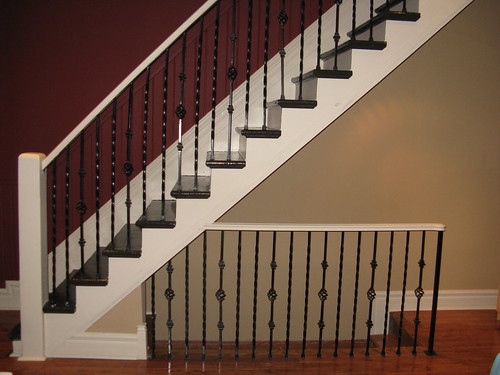 They were actually finished last Sunday, but last week didn't present time for a proper post.  After all the work we did to get these finished, they deserved a proper DIY reveal. 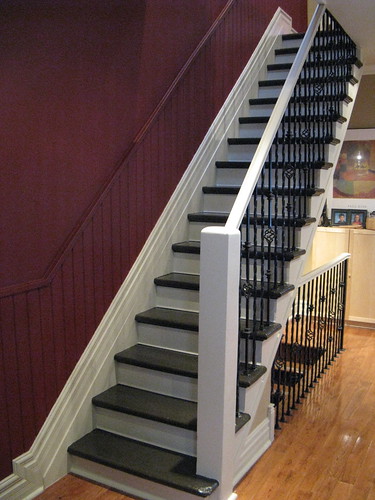 When we bought the house, the stairs were painted white, had a green runner and orangey-stained railings.  The post looked like a dog chewed it (because a dog chewed it) and the runner was 99% dirt.  It didn't suit our style and was pretty ugly. 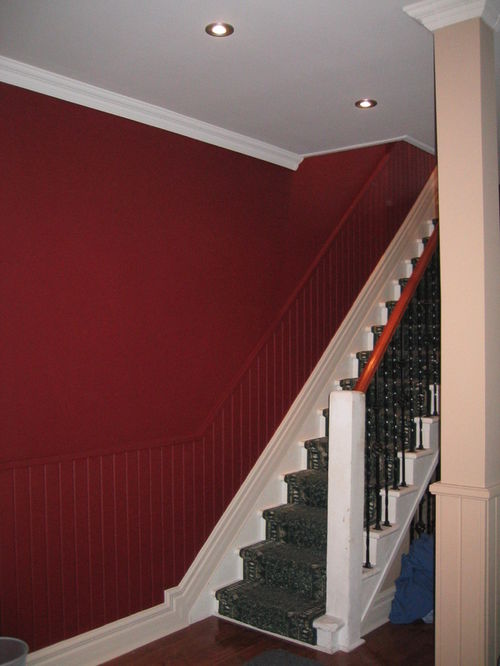 We decided to pull off the carpet and to our surprise, they painted the stairs just enough to hide the runner.  And the runner was hiding a whole lot of junk like old glue and fuzz and dog hair and other stuff that is nightmare-inducing.  It was disgusting.

So we decided to strip the stairs of all the peeling paint and disgusting stuff and repaint them.  Once I realized what a big job that would be, I gave myself 10 years to complete it. 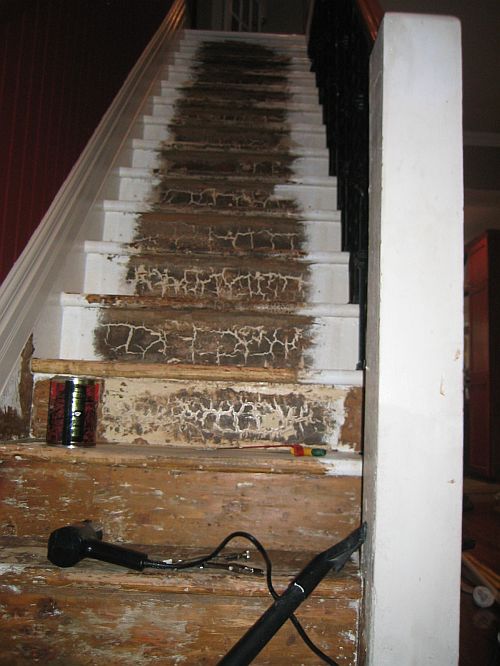 We got it done in less than 2.

Old houses have a certain charm, which means that no corner is square, stuff has bumps and nicks and evidence that lots of people have lived here and without completely ripping things out and replacing them, they will always have some part of that left. 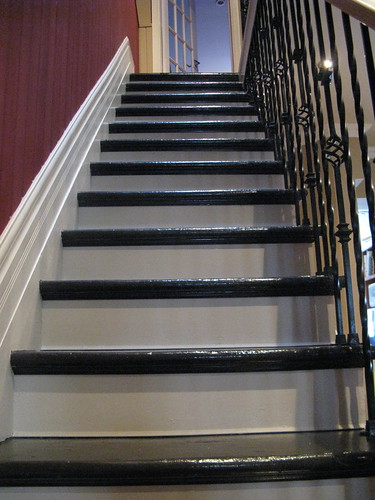 So our stairs aren't perfectly smooth or even; but they are sturdy and straight. 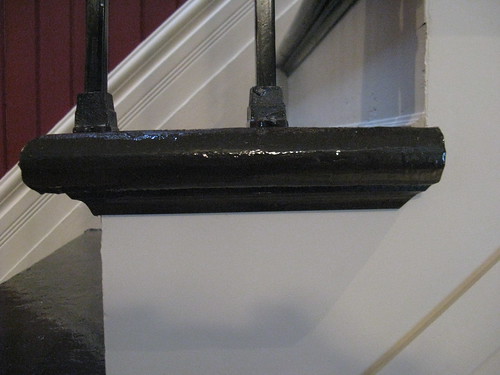 We decided to add trim to mask the not-so-perfect edges where the Bitter Chocolate meets the Natural Linen and I'm very pleased with the effect; it gives the treads a bit more heft and makes things look much straighter. 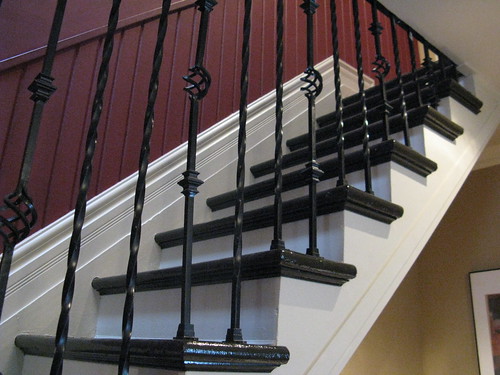 We had to use alkyd paint on the treads and at first the plan was to do the railings the same colour.  It was such a pain to work with, that I used the riser paint instead and while we were a bit unsure about the colour at first, we're used to it now and will live with it for a while. If it proves too difficult to keep clean, or we just don't like it, I'll get some latex paint in the brown colour and re-do them.  It will be a bit of a challenge because I'll need to take out a teeny artist brush to paint where the railing meets the walls or ceiling (which are the same colour as the risers so it was easy!), so there's another reason to love the railing I already have.

I'm so happy with how it turned out.  But at least right now I can say I will never tackle that job again.  Well at least not at this house.

Beautiful! I remember when I had the energy to tackle things like that. It is so rewarding to finish and enjoy!

That looks fantastic! You did an incredible job there. I am endlessly impressed with the stuff people are able to do, having been raised in a sheltered, "Call the handyman" environment myself.

I hereby wish you (can you tell I've been reading pseudomedieval stories lately?) many years enjoying the stairs of your labors!

I'm gasping at the amount of work! That's a lot of stairs to apply trim to, but the result is stunning. I love everything.

Way to go Steph! A big job but I am sure that you are pleased and proud that you are done. And you get to see your hard work every day!

The stairs are a masterpiece of good taste! Beautiful work, guys.

They look incredible! I love the colors. You did a great job! :)

Wow - they look wonderful. You must be so thrilled to have them completed.

That is one nice set of stairs! Well done!

They look great. I love the way the dark treads seem to somehow intensify the wrought iron. There are so many angles and surfaces on stairs, so many decisions on which colour to put where - plus all the work of actaully carrying out those decisions. You've done well.

Wow. Color me impressed. Home improvements are so much more taxing than knitting...!

is too bad you don't have a picture of the original wall colour too...

Beautiful! Looks so elegant. We have an old house, too, and I know the amount of work it takes to remove years of built-up paint and 'stuff'.

All the way to refurbishing Hell and back! :) Beautiful result. Was interesting to see the progression of your work!

Add me to the list of the impressed. What a dramatic (and needed) change! Good for you, and congratulations for beating your ten-year deadline by eight years!

Yeah! They look awesome! The trim was a great call. I would have never thought of those but they sure do a LOT for the whole look of the stairs. Very nice. I only have one stair in the house but I'm looking at it critically now.

Looks great! What a lot of work. I think I'd probably never let anyone set foot on them after that much work!
Totally the right color choice, and the trim is a fantastic idea.

Your stairs are gorgeous! That is an amazing job!

We've been looking at houses, and I am always looking with an eye to what would have to be done to pass my livability test, what things I would want to fix right away or pay someone else to fix. The green shag carpet I saw was high on the list, but we're still looking so I have quite some time before I will have a project like this of my own.

They look gorgeous!! What an amazing job!

Almost enough to inspire me to do ours. I think I will lie down until the urge passes.

That turned out beautifully.

I love the contrast of the dark stair treads and light floors. Great job!