I don't have a lot of unfinished knitted things taking up space in my yarn credenza (yep, I have my own yarn storage furniture), but there are a few things I want to get off the needles by the end of the year.  I like the idea of knocking down my stash a few kilometres (I love the downloadable excel spreadsheet on Ravelry!) and also having a relatively clean slate for the new year so I can cast on a whole bunch of new things.

I also don't do a lot of Christmas knitting, but always cave at the last minute and decide to make a few things.

This year I wove a scarf for my brother Mike.  He made a request on his birthday, went through the stash with me and well, said it would complement his rather expensive hipster coat--how can a big sister refuse?

I didn't get good photos as I finished it a few hours before we had our Christmas celebration.  But here's Mike happy with his scarf. 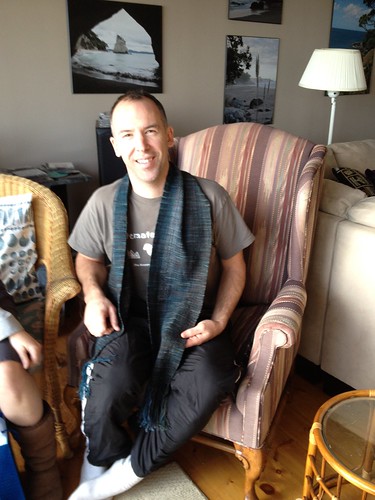 The warp was Indigodragonfly sock in Shadows and Fog and leftovers of Bugga and Tanis.  Yum.

I also decided to knit both kids socks for Christmas.  My children have size 9 feet.  Not my best plan.  I realized I wouldn't finish Emma's so I'll shoot for her birthday in January.  The pattern is Tiara from Indigodragonfly and the yarn is MCN in Now accepting applications for Minions.  It was a Smart-Ass/World Domination One Skein club offering in 2010.  Here's the first sock.  Not bad being 50% of the way there. 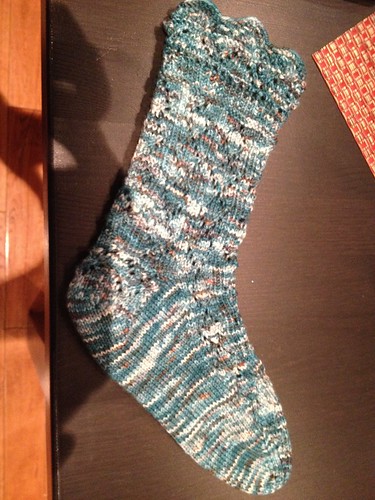 I did manage to finish Xander's sock.  I used the Velodrome pattern by Natalie Selles and Socks that Rock Lightweight in a one-off colourway.  It was a tight timeline--I finished them December 24th at 8pm.  The funniest part was him not noticing while I knit them in the car on the way to Mom's! 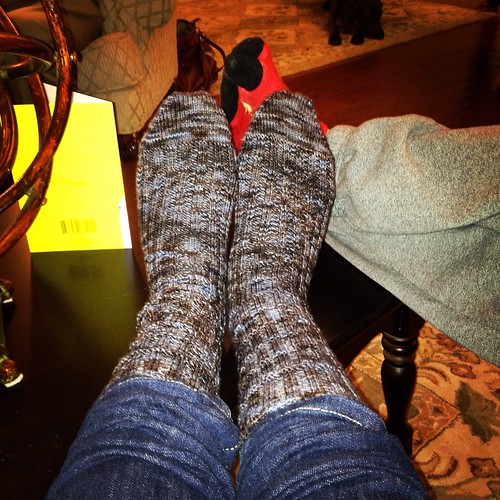 They were put on the second after he opened them--the finest compliment one can give a knitter. 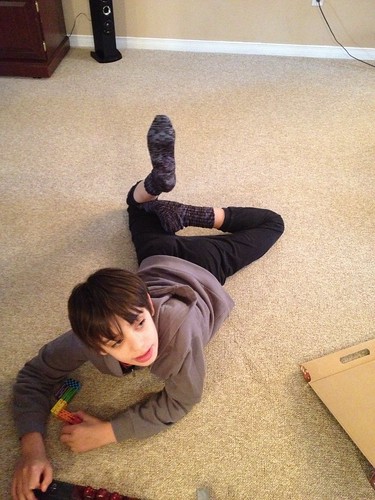 With all that Christmas knitting out of the way, I decided something for me was in order. I went with the easy win: Momentum Cowl in vintage stash Colinette Point 5. Started at lunch on Christmas, was done before bed. Emma is stealing borrowing it for now. 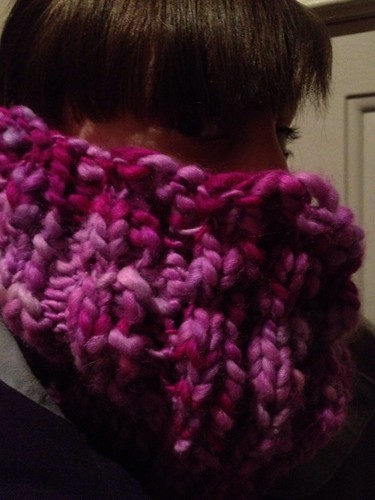 Now that those things are out of the way, my plan is to finish that Tiara sock and finally finish the Hanami Stole I started in 2009. Probably not doable in the next 2 days, but it's good to have goals!

It strikes me that you knitting socks in the car is unremarkable. It doesn't surprise me at all that no one thought they were a gift being knit under their noses.

I am doing something like this now. I have a project I started on Christmas Eve that I'm trying to finish before the ball drops, and a slew of UFO projects I want to get done in 2012. It would be nice to start with a truly clean slate, but I'll settle for a cleaner slate.

Those socks look pretty awesome and comfy. Or it may be that they're comfy, and that's why it's awesome. Well, in any case, it seems pretty cool to knit those in a car. It must take a lot of skill and focus to knit while aboard a moving vehicle. So good job!