Maybe I should just give up knitting (not really)

This winter has not been a great one for me knitting-wise.  I've made a few accessories that were just okay, but not much else, and I haven't had a project that really grabbed me.

Well, I shouldn't say that because working on Oshima was pretty great.  Until it wasn't.

I think I need a knitting win.

Knocking off a quick WIP was the plan last week.  The kids were at my Mom's for the March Break (and yes, it was fantastic), I had all of season two of House of Cards to watch and plenty of Indiodragonfly Smart Ass Knitters/World Domination one skein projects to choose from.  I got back to the Caulking arm/leg warmers and got to it.

I finished the first one and dove into the second one.  Then I took a little break and started the Sweetums fingerless mitts.  All was good.

Apparently I can't read.  I missed an entire line in the Sweetums pattern and didn't notice until 48 rows later when I couldn't figure out where to put the thumb.  I was silly enough to write to the designer and it wasn't until she explained it that I noticed I missed the line in the pattern.

While Sweetums was working itself out I finished both House of Cards and the second armwarmer.  Tried them on, did the photo shoot and then noticed something wasn't quite right. 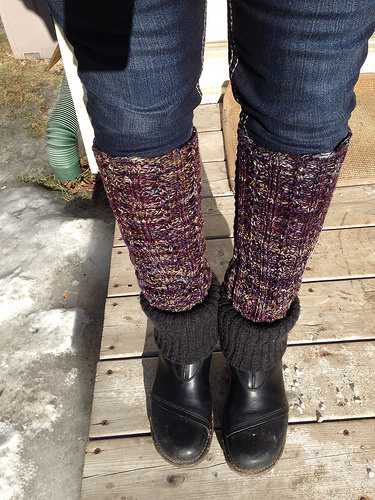 The second armwarmer was a full repeat (8 sts) bigger than the first one.  (No I didn't write down what size I was making, who does that?!).

I actually turned off the tv and counted the repeats on the first one twice to confirm the number: 56.  When I was casting on, I distinctly remember doing the math in my head as I distributed the stitches on the dpns.  16 per needle.  Because 16x4 is totally 56.

Twelve inches, ripped out.  I casted it on properly and it's in the travel knitting pouch.  I'll get back to it.

Sweetums is coming along very nicely.  Almost done the first one. 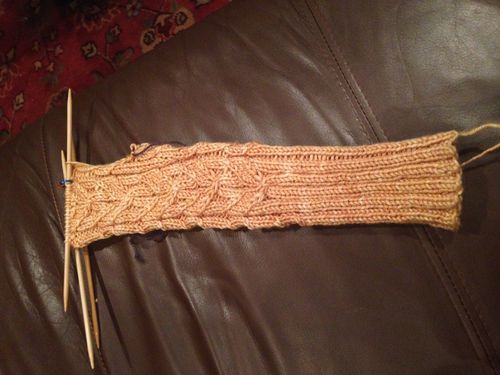 I hope this goes smoothly now.  I'm tired of so many mess ups of the easy things that I've been doing most of my life like reading and counting.

Ouch! Those are some discouraging knitting fails. Hope the restarts go better.

Wow, you've had a bad run, due for some fair-weather knitting I think!

That series of events is pretty hurtful. Sadly, we've all done it.

In times like this, I knit a hat. A nice, one skein hat. Something that doesn't need a mate that actually is the same size. Even if the hat doesn't end up fitting the person for whom it was knit, chances are it'll fit SOMEONE. A successful hat means I believe again that I can knit.