Fireplace hearth is gone and replaced with some fun tiles. Our toes have never been happier and I’m really happy with the result. 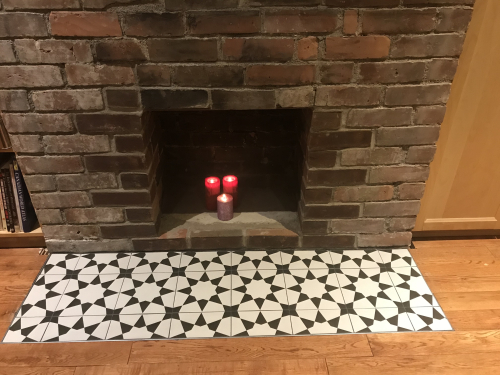 Picking the tiles was a bit of a challenge as we had a defined space and wanted to avoid too much cutting. Our first thought was penny tiles as they give some flexibility and are retro-nifty.  I also wanted something that would make an impact but for a small price. Enter the $1.28 porcelain tiles from Home Depot. Avoided the likelihood of cutting a million little pennies, but still ended up with only 6 tiles not cut....lessons we carried to the next phase. 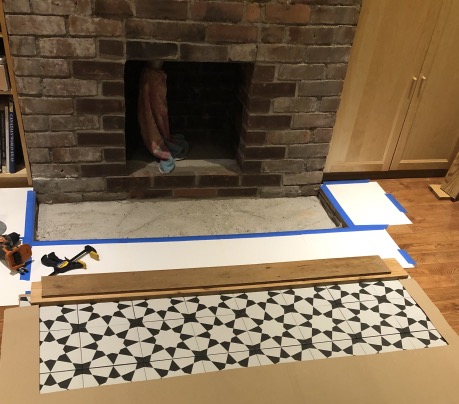 We filled the hole left from our earlier excavation with dry pack and got it mostly level (nothing in this house is level so close enough is good enough). We laid out our tiles and used our cardboard jig to assess. Lots of cuts... A few hours later we rented a wet saw and got to work cutting. We had hoped to get two tiles from fireplace out, but it didn’t work without grout lines that were far too wide. Once we (well mostly I) acknowledged that the best course was to have full tiles in the middle and cut tiles all around, it went pretty quickly. 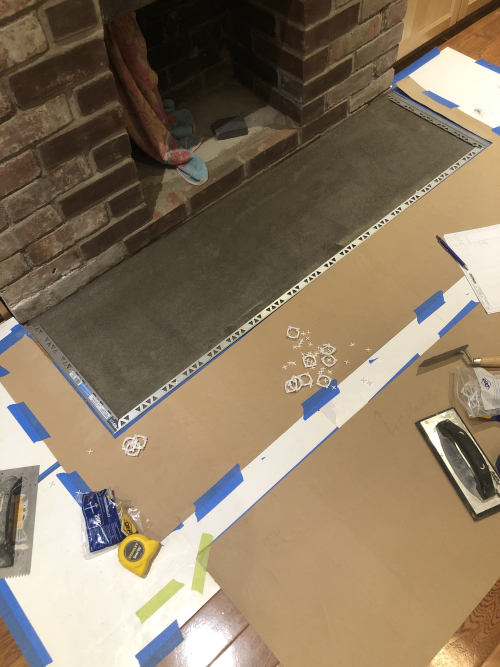 We started with a metal transition edge, then laid the tiles right on the dry pack. The tiles closest to the bricks were tricky because that line was not straight - each tile is a different width, but the busy pattern helps obscure that and again, old houses are not about straight lines. 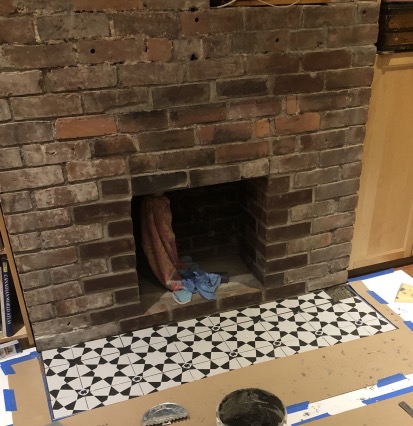 The next day we did the grout. It was a bit more challenging than previous projects because the of the tiny spaces between the tiles - 1/16th”. There’s also something disconcerting about spreading charcoal grout over white tiles. 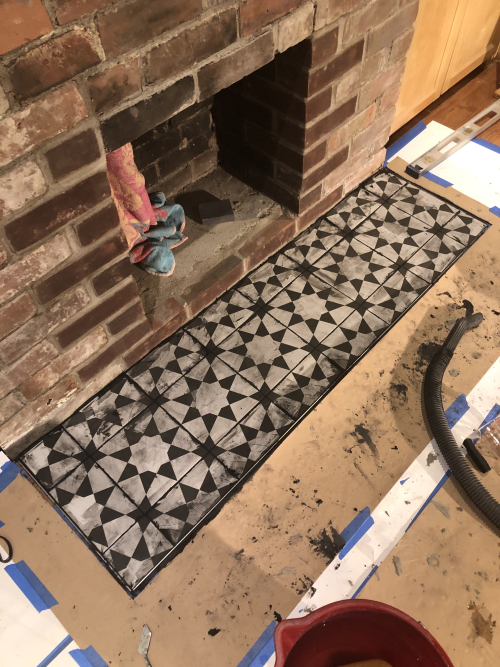 The end result is lovely. There's still work to do around the fireplace and we're considering a mantel; work to keep us occupied during the current Ontario state of emergency and beyond. Some of this work is definitely not January-friendly. I also need to put something in the fireplace - I'm thinking a large basket would be nice or maybe a pretty screen. Better than an old towel plugging the old pipe. 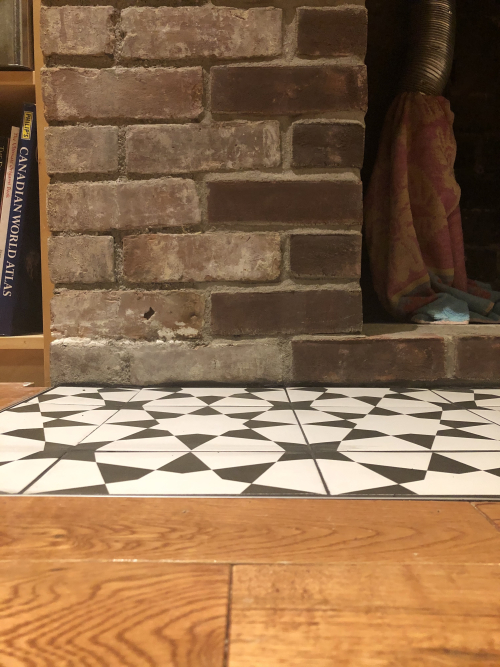 Emboldened by our success, the tiling didn't end there. I decided that the ridiculous tiled entry way had to go. It felt even better than busting up the hearth.

There's so much wrong here: The "mat" is too small, the pattern around the edge runs out before it goes around the larger tiles and it's just ugly. It's the same pattern as the kitchen we renovated a while ago. 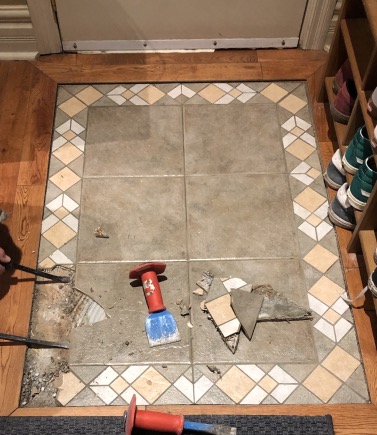 Once I busted out the old tiles, things got silly. 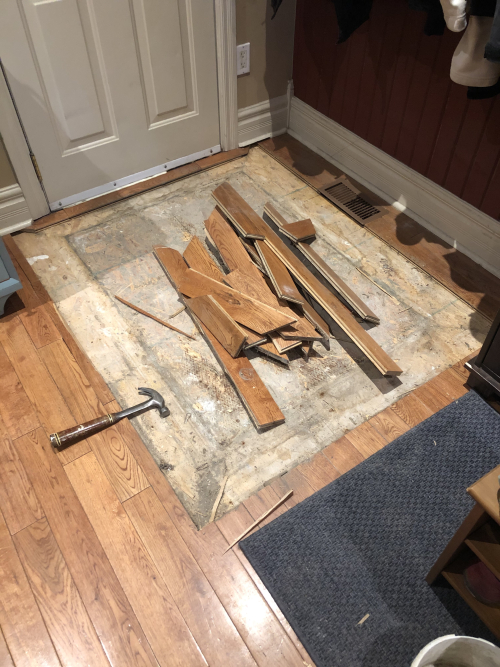 We removed the wood that framed the tiles to enlarge the footprint. Then we thought - how do we do this so we don't have to cut so many tiles? Or any tiles?

Then we got out the saws.

That little one would take forever, so Craig used the circular saw and we made a hole to fit the 20cm by 20cm tiles with the grout lines. The only two tiles we had to cut framed the heating vent. 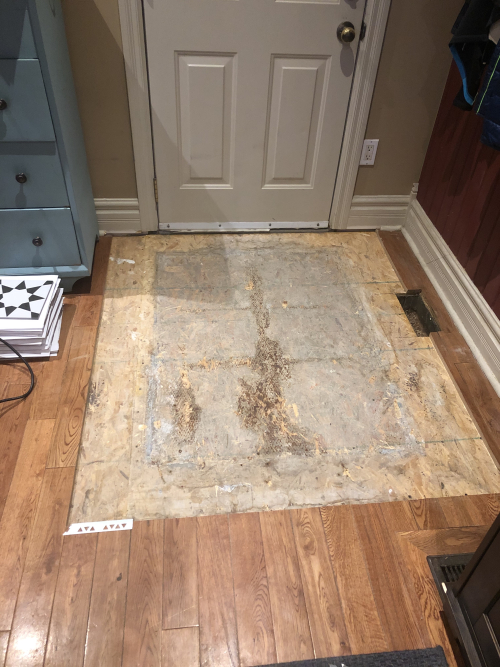 This might be our most challenging DIY home improvement project yet and it shouldn’t have been. Amazing how 1/4 inch can really mess things up. More on that and the finished project soon...