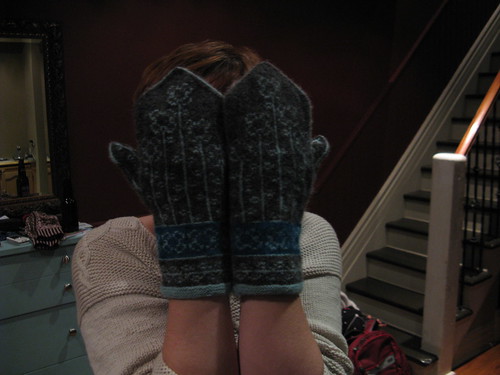 I haven't really be hiding, but it feels that way.  I caught some sort of bad cold/possibly flu virus that knocked me on my ass for a few days, including Tuesday when I was too sick to pick up the needles and knit anything.  Wednesday I was wearing a nice groove into the couch, watching daytime tv (Law & Order re-runs) and got to work on my Vinterblomster mittens.

I went back to work Thursday which proceeded to kick my ass in a whole different way which is why I'm not blogging about my snazzy new mittens until now.

Oh, except for another reason.  These are the mittens fresh off the needles.  Notice anything? 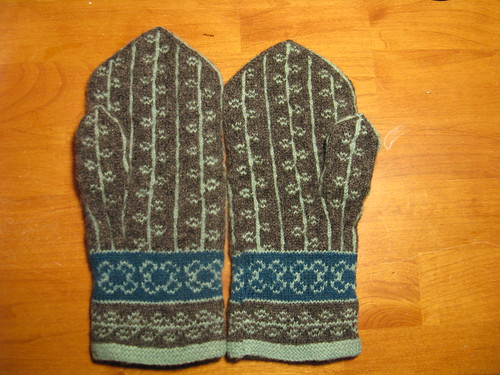 It might be because I knit the first one six months ago during a very stressful time and the second one in bits and bobs, ending hopped up on cold medicine, but whatever the cause, the result is the second mitten is bigger than the first, which was already a bit bigger than I wanted.

I figured I would try some interventions instead of trying to reknit them.  First, I wet the big mitten and dried it slowly and carefully in the dryer.  It worked well and it shrunk to the same size as the first mitten.  For a day.  When I wore it, it grew back to its original side.

So I went for drastic measures.

Since both mittens were a bit big, I threw them in the wash and felted them.  Not a total, no stitch definition felting, but a light fulling. 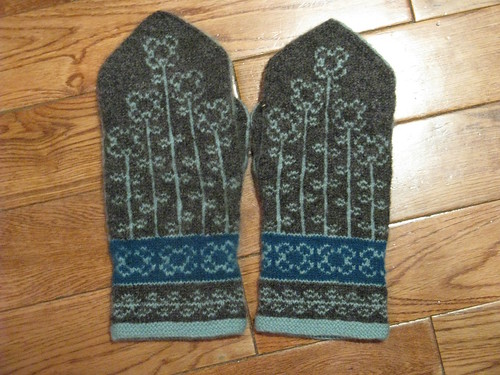 The mittens shrank nicely, are about the same size (the big one is still a bit longer) and I got me some warm, pretty mittens. 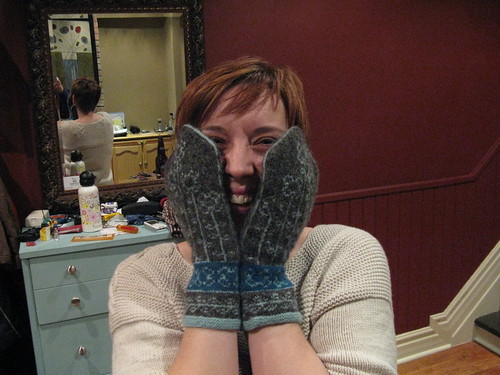 One area where my new MacBook totally delivers is on the photo side of things. My Canon Powershot S230 is five years old and on my PC I needed to download pictures using Canon's cumbersome software; without it, XP couldn't seem to find the camera. With my new 'puter, I plugged in the camera and there were my photos! So I took pictures of all my WIPs.

Earth Stripe wrap is at the 112cm mark (I think it's about 150cm at finished length without fringe). I'm sooooo close. I want to wear this a few times at least before Spring, so this is high on my list. It's too big and there's too many colours to carry around so I need to be home to work on this. Not a problem this week because Craig is off to the Tim Horton's Colts Provincial Championships tomorrow so it's just me, the kids and the tv. Go Beck Rink! 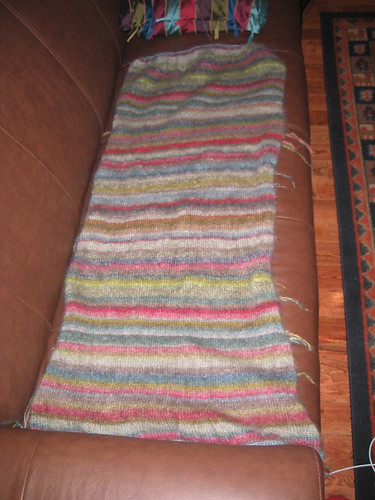 I finished the first Vinterblomster mitten last Tuesday night. Here it is blocked. I love it. 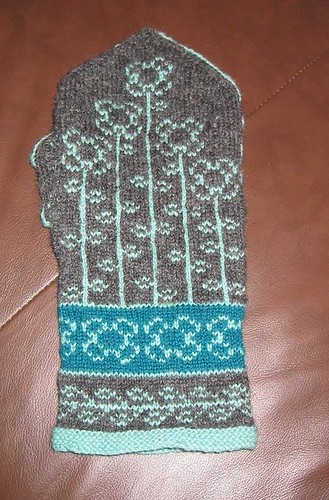 I started the second mitt last night so that there is a chance I'll have a pair to wear this Spring (I think they'll match nicely with Claudia). 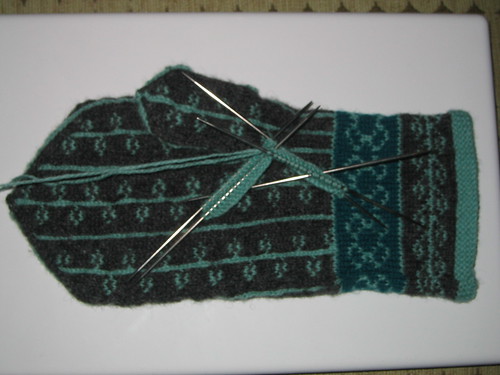 Emma's socks are almost done (Oak grove mc and Sheldrige Farms soft touch cc). Her feet have appeared to stop growing (she's just turned 9 and wear's a woman's size 7, so having them slow down for a bit is good for sock knitting and shoe buying). 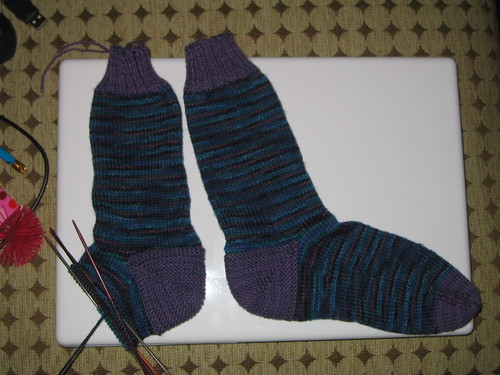 And this is the thing that is distracting me from all of the above. My first piece of Vino--Laura's awesome sweater coat. The yarn is Dream in Colour Classy in November Muse and I love knitting this and looking at it. The colour is exactly my style and it's fast and fun. I put this into the bottom of my knitting bag and left all the rest out so I don't play with it for a bit. 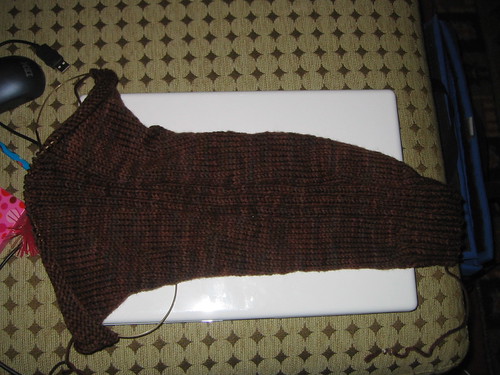 This also game me the chance to show off my new couch and funky ottoman.  The scary ikea couch is no more and I have place to rest my feet while I knit!

Friday night the snow started.  It was sorta pretty and in Toronto it was melting when it hit the road.  We (somewhat foolishly) decided to hit the road too and drove to Tweed.  It took a long time but we arrived safely and I didn't have the stroke that it felt like I was having when we passed the big trucks.

It was a good thing we left Friday, because we certainly couldn't have left Saturday when the Mother of the first storm struck.

The cottage windows usually provide a gorgeous panoramic view of the lake.  This is what we saw for most of Saturday (I put the tree in the photo so you would think I just took a picture of a white piece of paper): 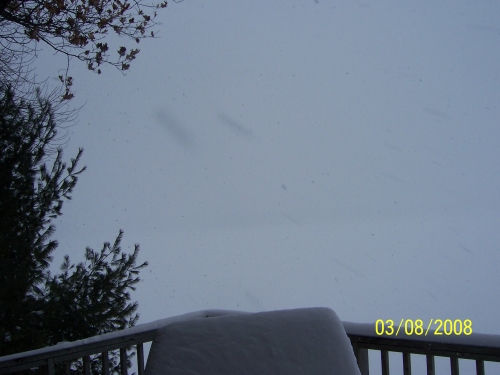 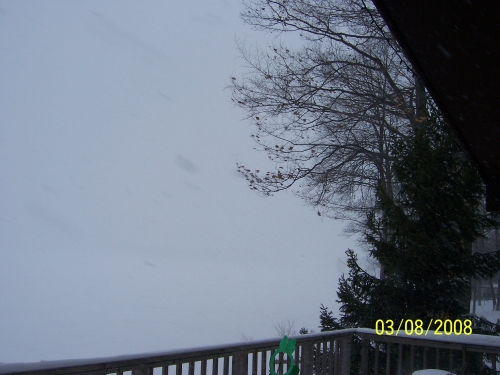 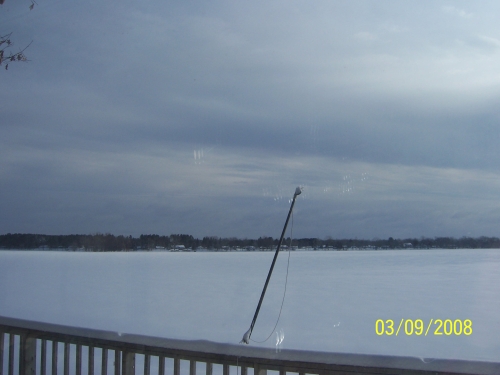 I haven't checked to see how  much snow we got, because in March any snow is too much snow.

The good news was that I was inside with a warm fire working on my Vinterblomster mittens. 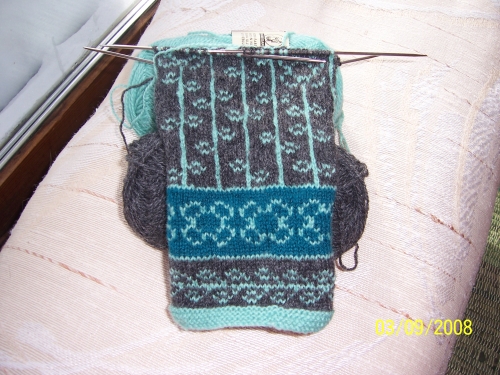 It was a long storm.

Thanks to Ravelry, I discovered some very cute mittens. I love daisies and there's something so cheery about this pattern that I want to make them right now.

What sealed the deal for me was having the called-for yarn in my stash. Amy brought it back for me from Norway and I like the idea of using it for a Norwegian pattern (where I get to keep saying Vinterblomster). 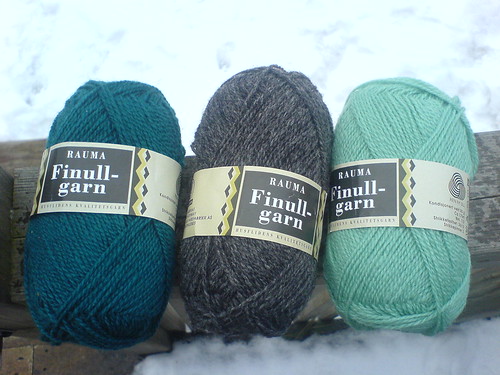 I'm still thinking out what colour goes where. Right now the plan is for the grey to be the background, the light aqua for the flowers and the teal for the contrast. I like the teal most of all, so wish I could use it more but I don't think it'll pop enough. The other option is to have the teal as the main colour and use the grey as the contrast--I may actually have to swatch (which does kill the cast on and get started thrill of a new project).

I am secretly hoping that by starting these mittens I will make all the snow melt and force Spring to arrive.  (Yes, I am in denial about yet another impending snow storm.)